An electronic cigarette is an electric inhaler for personal use, producing an aerosol inhaled by a person from a solution. The inhaler creates a fine aerosol from the liquid, and in it in the gaseous phase particles of chemicals contained in the solution are distributed. In appearance, the aerosol is similar to tobacco smoke and is also intended for inhalation.

According to its functional purpose, an electronic cigarette is a substitute (alternative) to smoking conventional cigarettes, that is, it is a device for consuming nicotine in a form that is different from smoking.

Brief description, purpose of the device 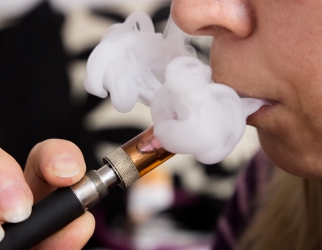 Electronic cigarettes were invented in China, because there are a lot of people who smoke in this country, as a result of which public health structures are interested in minimizing the harm that compatriots get from tobacco use. It was with the aim of reducing the harm from addiction that an electronic cigarette was created and put into use, allowing the smoker to perform the usual automatic actions (putting a cigarette to his mouth, puffing, exhaling smoke, etc.) and, at the same time, provide blood flow only nicotine without inhalation of the associated harmful combustion products of tobacco and nitrate-soaked paper. In China, electronic cigarettes began to be sold in 2002, and in Europe and the United States – from 2006 to 2007.

The operation of the electronic cigarette quite simple – a device using an electric discharge creates an aerosol from the liquid it contains, which in appearance is very similar to ordinary steam or smoke from tobacco. It is this aerosol that contains nicotine and flavors that a person inhales. After inhaling, part of the steam is exhaled. That is, when using an electronic cigarette, a person completely repeats the actions performed when smoking a regular cigarette. Thus, there is a complete imitation of all habitual actions for smoking, which is very important for smokers with experience.

The cigarette is activated using a special button or just puff. As a result, the device triggers a source of electricity (battery), which supplies a discharge to the atomizer, which, in turn, quickly heats the liquid with nicotine and flavoring to a very high temperature so that it turns into a gaseous state. Then a person inhales the aerosol formed in this way and exhales it back after a few seconds.

Power Electronic Cigarette possible at any time, provided that it has liquid and enough battery capacity. Accordingly, when using an electronic cigarette, it is necessary to monitor the capacity of its battery, regularly recharging it or replacing it with a new one, and the amount of liquid, which should be poured into a special container as needed.

E-cigarette fluid may contain different amounts of nicotine and a wide variety of flavors. Depending on which flavor is added, "steam" e-cigarette will have one or another pleasant smell and taste. And depending on the concentration of nicotine in the solution, the person will receive more or less of this substance with each puff.

The device and the principle of operation of electronic cigarettes

Any electronic cigarette, regardless of the variety and design features, has essentially the same type of device and principle of operation. For the best understanding of the principles of operation of the device, we first consider its design and the purpose of individual components.

A schematic device of an electronic cigarette is depicted in Figure 1. As can be seen from the figure, any cigarette consists of three main structural units – an evaporator (atomizer), a cartridge with liquid and a power source, and all other parts (for example, a simulator of the tip of a cigarette, touch sensors and etc.) are optional. Accordingly, such additional parts may or may not be available in various models and modifications of electronic cigarettes. 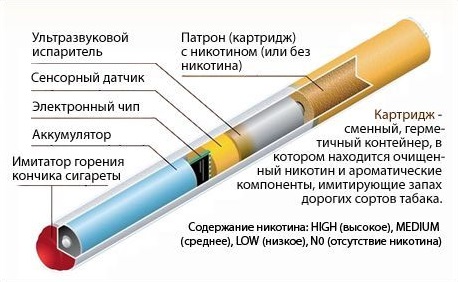 Atomizer (evaporator) – This is a device in which there is a metal helix capable of rapidly heating to high temperatures (for example, nickel, titanium, nichrome, cantal, fehrl, etc.). Heating the coil leads to the fact that the smoking fluid fed to the atomizer begins to evaporate, forming an aerosol. This aerosol under the action of the blowing system enters the cigarette mouthpiece and is inhaled by a person during a puff. The operation of the atomizer is provided by the discharge of the electric current supplied battery. Accordingly, the battery in the electronic cigarette device is the power source for the operation of the atomizer.

Liquid tank for smoking, in which nicotine and flavors are dissolved, is located in the immediate vicinity of the atomizer and is intended, respectively, for storing and supplying the solution to the evaporator. In many models of electronic cigarettes, the evaporator and the reservoir with the liquid are combined into a single structural unit, which makes it possible not to use a synthetic wick to supply the solution to the heating coil. If the atomizer and the liquid reservoir are not in a single unit, then various constructive methods are used to connect them.

The general principle of operation of any electronic cigarette is the following: a smoking liquid containing nicotine and flavors is either in a special tank, or it permeates the wick from a synthetic winterizer. This liquid at the beginning of the use of an electronic cigarette is fed into the atomizer, the main element of which is a coil of any metal. The heated coil gives off heat to the liquid and breaks it up into small gaseous particles, which the person inhales in the process. "hovering" e-cigarette. The helix of the atomizer is heated by an electric discharge supplied to the metal by the power source (battery). Thus, it is obvious that the work of the electronic cigarette is provided by the atomizer and the battery.

In more detail the principle of operation of an electronic cigarette is described using the following sequence of actions that occur in the device during its operation:

one. The device is turned on either with a button or just a simple puff. If the design of the electronic cigarette has a button, then for the implementation of each puff you need to press it. If the device is not equipped with a button, then the implementation of the usual tightening includes it due to the impact of a jet of air on a special sensor.

2 After the device is turned on, the liquid with nicotine dissolved in it and flavors through a wick of non-combustible material (for example, from a silica cord, an oxidized metal mesh, etc.) reaches the atomizer helix.

3 The battery transmits an electric discharge to the atomizer, thereby heating the metal spiral of the latter.

four. The heated coil transmits the heat of the liquid almost instantly, as a result of which the latter is sprayed, forming an aerosol cloud.

five. A person takes a puff through the mouthpiece of a cigarette, due to which a stream of air enters the atomizer through small openings. Next, the aerosol is captured by this stream of air and the person inhales the finished mixture containing nicotine and flavors.

Male chest seals In terms of their structure, the mammary glands of men are the ...

Plant description to dream Sneep – A genus of perennial herbaceous plants belonging to the ...