Polycystic ovary syndrome as a cause of infertility

Polycystic Ovary Syndrome (PCOS) is a complex, multifactorial hormonal disease. The disease is inherited – genetically. Characteristic for him are such manifestations as: an increase in the blood content of male sex hormones, lack of ovulation and a regular menstrual cycle, disorders associated with the general metabolism of the body.

PCOS is detected in 5-10% of women of reproductive age and 20-25% of cases among women with infertility. Among endocrine cases of infertility, PCOS is the main cause of disorders in 50-60% of cases.

There is no official international classification.

By the time of occurrence:

• Primary – congenital pathology.
• secondary (against the background of congenital dysfunction of the adrenal cortex (VDCN), obesity and other disorders).

The causes and mechanism of infertility in this pathology 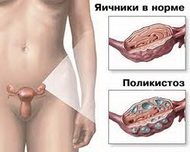 There is no single view on the etiology and pathogenesis of PCOS. This disease is regarded as genetic, it is based on a violation of the synthesis of estrogen and testosterone in favor of the latter. Dishormonal disturbances cause impaired follicle maturation, lack of ovulation, and menstrual disorders.

The main feature of PCOS is the diversity of clinical manifestations, which can be conventionally represented in the form of three main groups:

• Disturbances of the reproductive system, manifested by delays or lack of independent menstruation and ovulation, often leading to infertility and the development of spontaneous abortions.

• Skin manifestations of androgenization in the form of excessive hairiness (including on the face), acne, seborrhea and blackening acanthosis (darkening of skin with increased friction), which is considered as a sign of insulin resistance (the phenomenon in which insulin does not have the desired effect on the cells of the body).

• Metabolic disorders that are manifested by obesity in the abdomen, increased insulin levels, disorders of carbohydrate and lipid metabolism.

Diagnosis is based on the clinical picture of the disease and on the characteristic morphological changes in the ovaries.

The diagnosis of polycystic ovary syndrome can be made in the presence of two of these symptoms:

An increase in LH levels and an LH / FSH index of more than 2, although not a universal symptom, is considered as one of the biochemical markers of the disease.

• an increase in ovarian volume of more than 10 cm.
• at least 12 follicles located on the periphery of the ovary.
• Ultrasound of the pelvic organs – to identify the above echographic signs of polycystosis.
• Ultrasonic color doplerometry – reveals an increase in blood flow in the tissues of the ovaries.

Clinical examination – The nature of the menstrual cycle, reproductive function and clinical signs of androgenization are evaluated.

Hormonal examination (determination of serum LH, FSH, prolactin, estradiol, total and free testosterone, androstenedione, DHEA-C, 17-hydroxyprogesterone, cortisol, progesterone). Allows to reveal quantitatively dishormonal disorders.
• Test with ACTH (tetrakozaktid) – with suspected congenital dysfunction of the adrenal cortex (VDKN)
• Evaluation of insulin resistance – based on fasting glucose levels and insulin.
• The glucose tolerance test with a quantitative assessment of the glycemic profile and insulin secretion curves (diagnosis of impaired glucose tolerance and hyperinsulinemia) is performed by an endocrinologist. It includes measuring glucose and insulin on an empty stomach, then taking sugar syrup and a series of measurements at regular intervals of insulin and glucose. A study is made to assess the dynamics of blood glucose and insulin concentrations.

Lipid spectrum assay – quantified the content of various forms of fat in the blood.

Magnetic Resonance Imaging (MRI) if an ovarian or adrenal gland tumor is suspected.

Do you need advice from other professionals?

Consultation of an endocrinologist for the diagnosis of hormonal changes in the body, as well as clarification of the severity of metabolic disorders, is shown to all patients with PCOS.
Infertility treatment for PCOS

At the second stage, induction of ovulation is performed. Preparations and schemes for their administration are determined taking into account the clinical and laboratory characteristics of the patient. During ovulation induction, careful ultrasound and hormonal monitoring of the stimulated cycle is carried out.

• With PCOS and obesity, a decrease in insulin resistance is observed. Therefore, it is recommended to prescribe antidiabetic drugs that increase insulin sensitivity (drugs from the biguanide group – metformin, or drugs from the thiazolidinedione group – pioglitazone). Therapy is carried out for 12 months.

• In the presence of high levels of LH – their medical reduction to complete suppression of ovarian function.

• In the adrenal form of PCOS, glucocorticoids (hormones) are prescribed to suppress the synthesis of male sex hormones.

Induction of ovulation with PCOS

Indications for surgical treatment of infertility with PCOS:

Optimal conditions for surgical treatment are laparoscopic access, removal or destruction of the surface layer of the ovaries as a source of androgens. This method is preferable in view of reducing the risk of adhesions formation and damage to the ovarian follicular apparatus. Laparoscopy is performed in the hospital under intravenous general anesthesia.

After an operation on an outpatient basis, an assessment is made of the effectiveness of the operation performed within 4-6 months:

• restoration of the regular rhythm of menstruation
• statement of ovulation
• pregnancy

In the absence of data indicating the restoration of the ovulatory menstrual cycle, inducers of ovulation are prescribed.

Surgical interventions on the ovaries in the case of PCOS have a short-term effect, and drug treatment is aimed at facilitating the onset of pregnancy, that is, neither of these methods have the effect of curing the patient of PCOS. However, adequate treatment of this disease often leads to the achievement of pregnancy, the physiological course of carrying a child and his birth.

2019-11-28
admin
Предыдущий Bladder ultrasound – preparation, activities before the procedure, indications and contraindications, techniques for men and women, interpretation of results, price
Следующий The step-by-step recipe with the photo