How to take Tenoric?
Tenoric tablets are intended for oral administration (orally). They must be taken at the same time of the day, regardless of the meal time, without chewing and drinking a small amount of water. The dosage of this drug is carried out in terms of atenolol (50 or 100 mg), and when buying a package with Tenoric, the patient should pay attention to the dosage of this active ingredient.

Tenoric is not used for the relief of attacks of arterial hypertension or angina, it is intended for prolonged, course use. Do not prescribe the drug in acute periods of disease, accompanied by an increase in blood pressure.

If it is necessary to perform surgery under general anesthesia, the doctor should recommend that the patient stop taking Tenoric 48 hours or more before the operation. With special attention in such cases is carried out and the selection of drugs for general anesthesia.

In some cases, smoking patients who use Tenoric may experience a decrease in therapeutic effect. In such cases, the doctor may recommend quitting smoking or prescribe another antihypertensive agent.

Patients with thyrotoxicosis and hypoglycemia should be aware that taking tenorica and other drugs with atenolol may mask some of the symptoms of these diseases. Regular observation by an endocrinologist is recommended for such patients.

After long-term administration of Tenoric, the drug is withdrawn gradually.

Patients should remember that when signs of an overdose of Tenorica are observed:

If you identify one of the above symptoms, the patient should immediately consult a doctor for symptomatic treatment in an inpatient department. In some severe cases of overdose, hemodialysis and other blood purification procedures may be indicated. 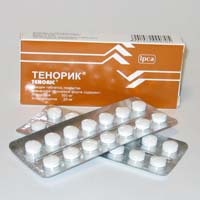 The dose of the drug, the time of admission and the duration of treatment is determined by the doctor individually for each patient.

As a rule, the initial dose of Tenorica is 1 tablet per day, 50 mg / 12.5 mg. Further, the dosage is increased by 2 times and is 100 mg / 12.5 mg 1 time per day. In case of insufficient severity of the hypotensive effect, the doctor may recommend taking an additional drug to reduce blood pressure, because the excess dosage of 100 mg / 12.5 mg is inappropriate.

In some cases, in violation of the functions of the kidneys, it may be recommended to increase the interval between taking pills.

When prescribing tenoric to elderly patients, the doctor may prescribe a lower dosage.

Tenoric during pregnancy and lactation

Tenoric is able to interact with various drugs. If necessary, the appointment of other pharmacological agents, the patient must necessarily inform the doctor about the admission of this antihypertensive drug.

Most patients respond well to the effectiveness of Tenorica. Patients who took this drug according to all the recommendations of the doctor, noted the development of a persistent antihypertensive effect already 2 weeks after the start of taking Tenoric tablets, a rare occurrence of side effects, ease of taking the tablets (1 time per day) and ease of dosing.

Most patients estimate the value of Tenorica as "affordable".