Не пропусти
Главная 7 Interesting to know 7 In Baalbek, even more megaliths were dug up (up to 2000 tons) and the South Stone (1000 tons) was cut off from the bottom in an unknown way

Baalbek is a city in Lebanon, where the largest bricks in the world (known to me) are actually used in construction. Weight about 1000 tons. The most famous of them is the South Stone.

Everybody likes to be photographed on it and near it. 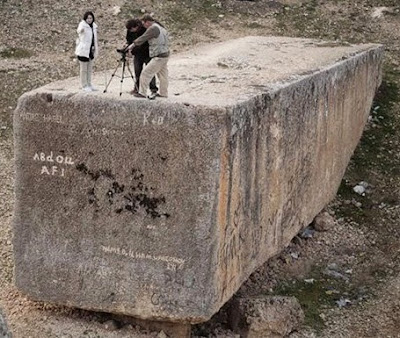 In the amusement park in Switzerland, they even made a graphic illustration, where around 20 smaller copies of modern cranes were placed around a smaller copy of this stone, which together could somehow raise this megalith. 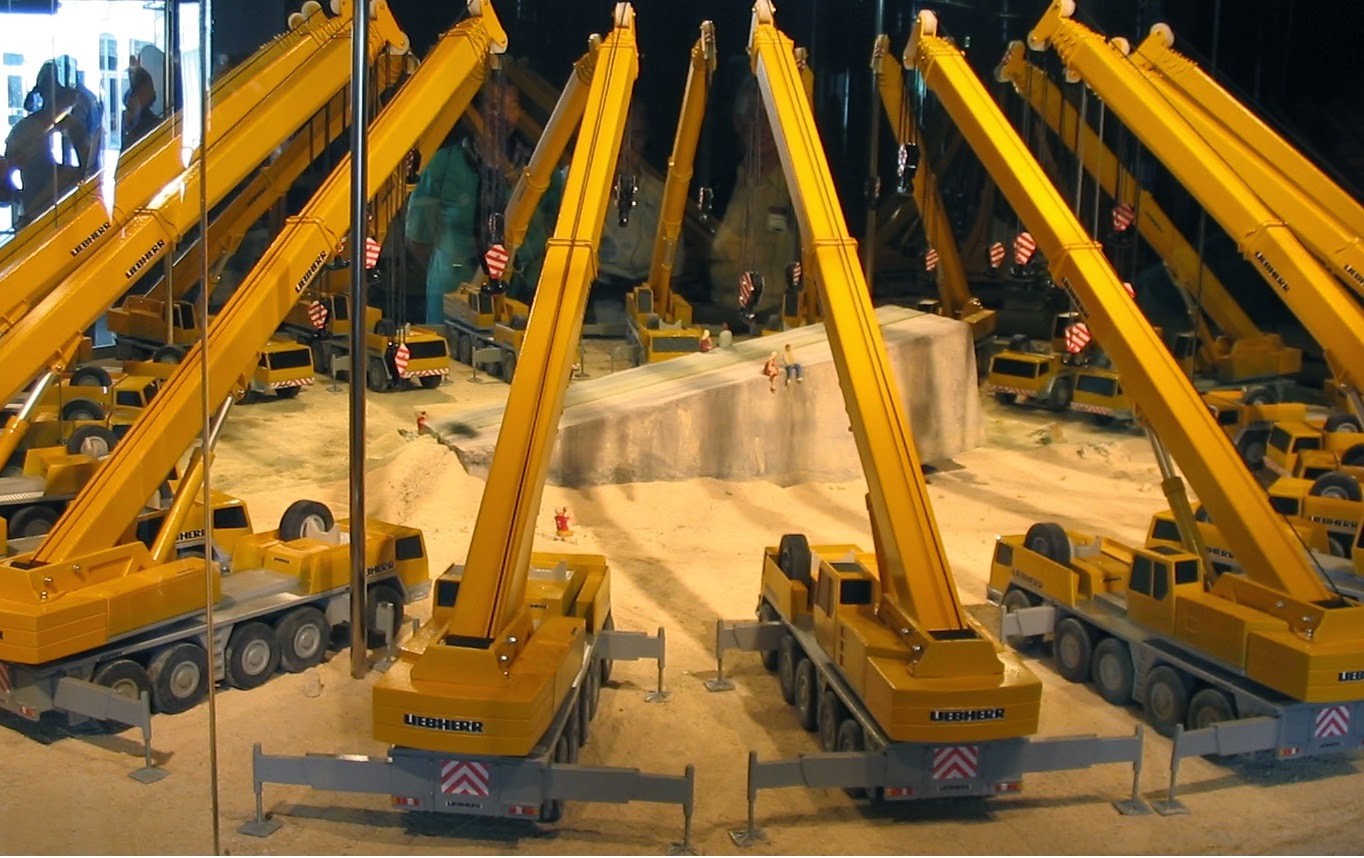 The second unfinished brick from the quarry of Baalbek is less known, from which someone later cut off several small blocks: 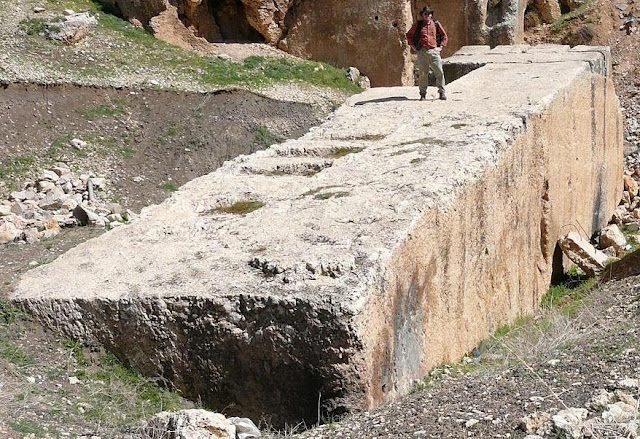 Here are similar bricks cut down, moved for a kilometer distance and tightly inserted into the walls of the megalithic structure, so that a needle cannot be inserted between adjacent bricks: 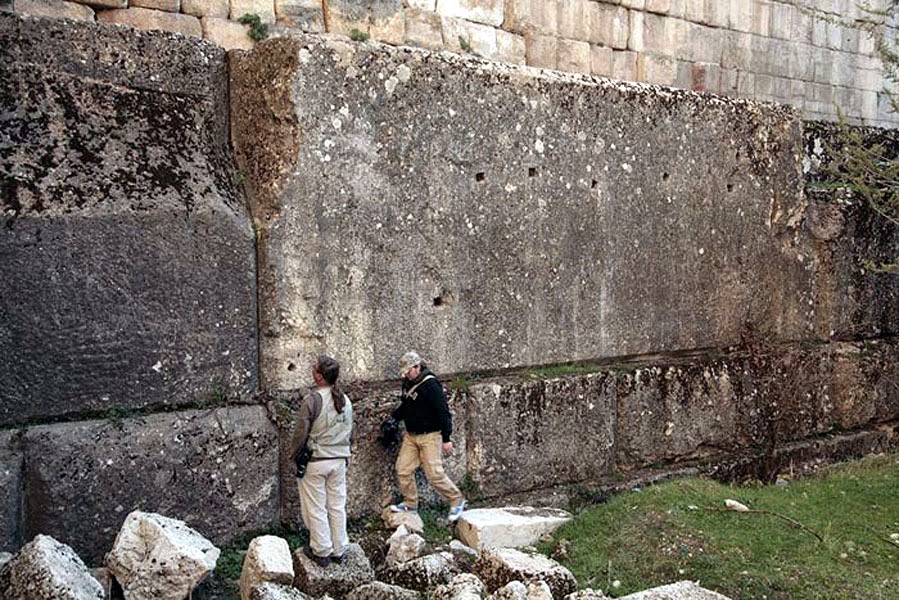 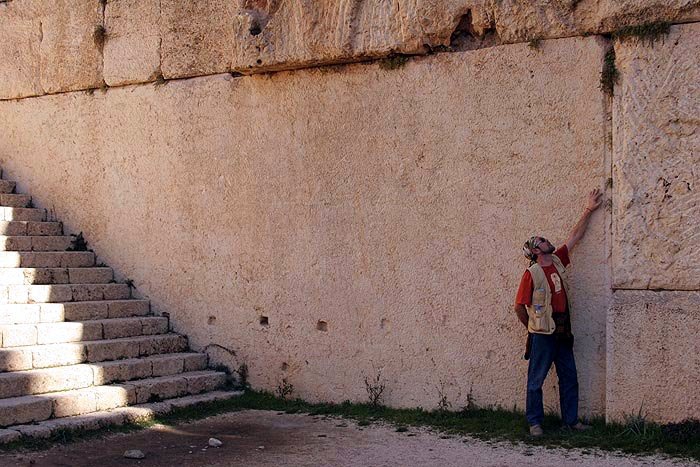 All these megaliths of Baalbek are known to the world for more or less the last 150 years since the appearance of photography in the middle of the 19th century.

But in the summer of 2014 there was a breakthrough, about which so far little is known even to those who are interested in these issues. Which prompted me to take up the pen.

German and Lebanese archaeologists finally decided to look under the South Stone, began to dig and dug at least 2 more bricks even larger, weighing up to 2000 tons: 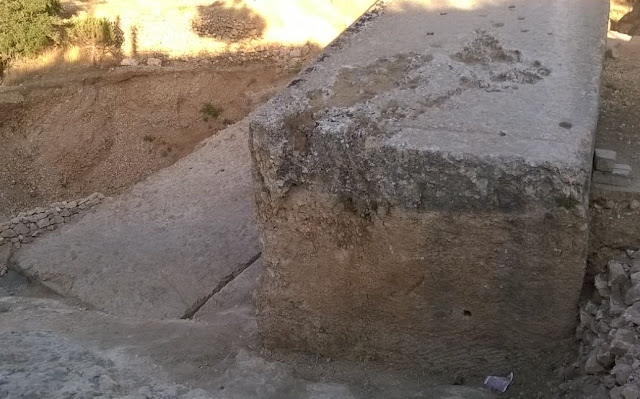 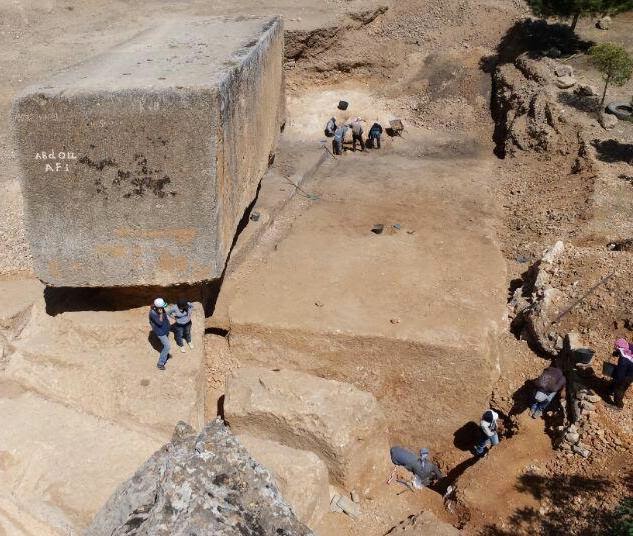 And this is not the most interesting. It turned out that the famous South Stone was most likely cut from the bottom of the rock by a horizontal cut. The cut line was exposed when the layer of soil beneath the stone was removed: 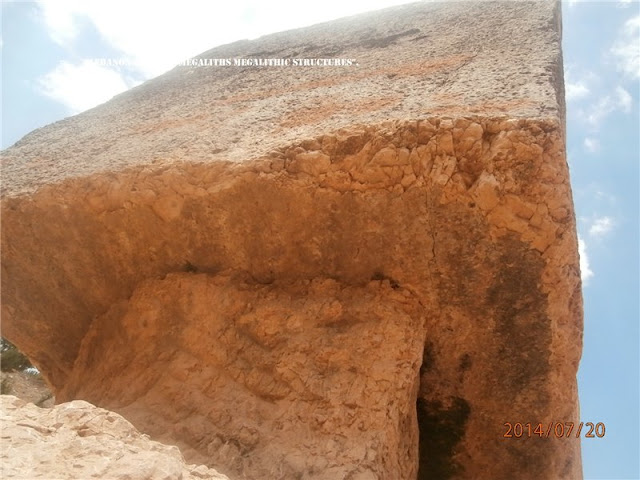 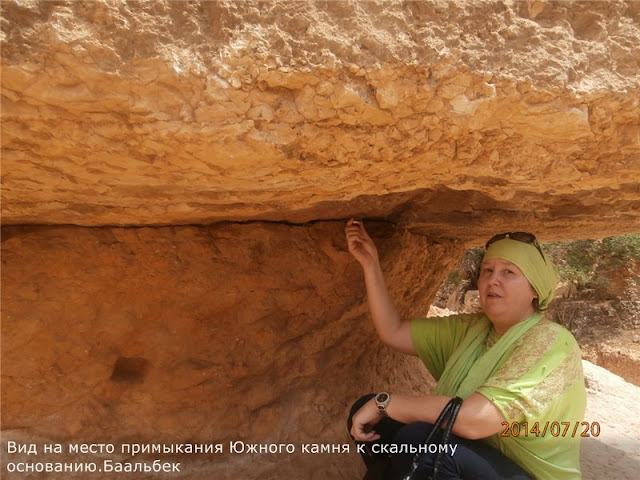 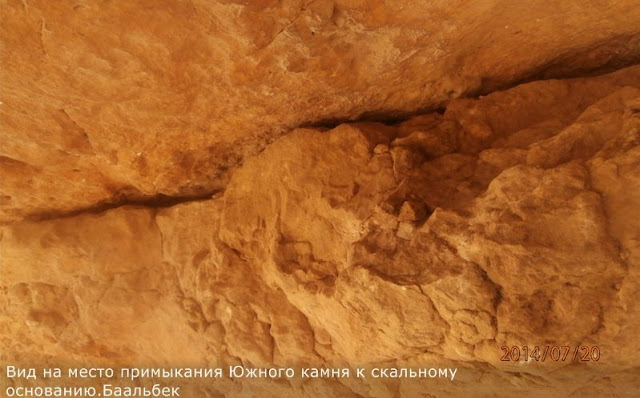 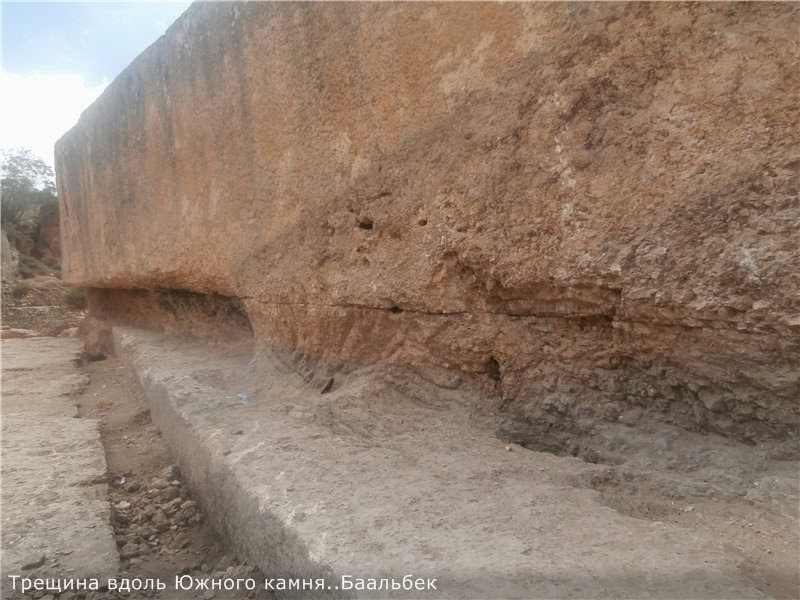 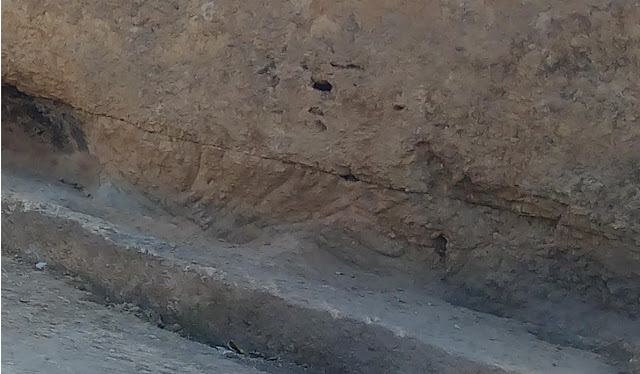 Maybe, of course, this is just a line only around the megalith, but not through, no one has yet checked whether it is through. To check, you need to lift this brick with a jack from one end, which is quite realistic. There are jacks for hundreds of tons.

But, most likely, the line pass-through. Read more in a separate study on the method of sawing off this megalith here http://levhudoi.blogspot.com/2016/02/kakotpilen.html

Initially, I found everything on the LAI (KR) forum (Laboratory of Alternative History (except Russia)) http://laiforum.ru/viewtopic.php?f=64t=3710

And even later, near the new megalithic, they dug out a wall of small blocks at a depth of several meters: 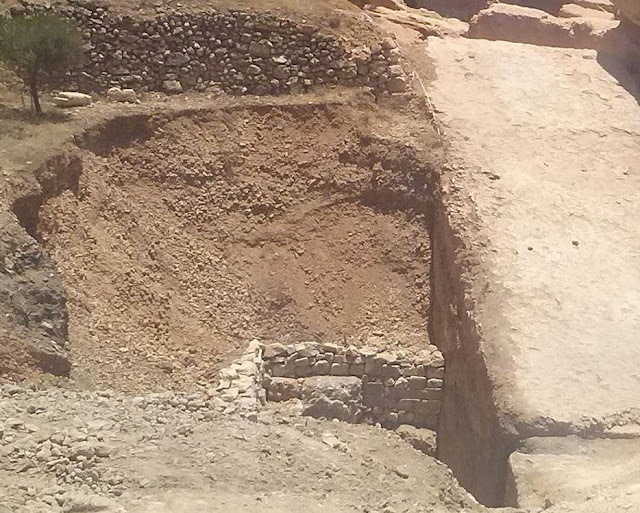 It would not have dug up the underground kingdom or something else fabulously fantastic. The skeleton of a giant for example.

On August 15, 2015 at the LAA forum, I met a newcomer to the forum Anastasia, who had just returned from there and confirmed my hypothesis that the South Stone is not a parallelepiped, but a truncated prism with a rectangular base http://laiforum.ru/viewtopic.php?f = 58t = 5459 His sides are not parallel. One edge Already another about a quarter. Andrei Sklyarov categorically rejected it.

I asked Anastasia to send me a video and photo because she could not upload them to the forum from the phone and I will help her to do it. Here is her drawing with the measurement results: 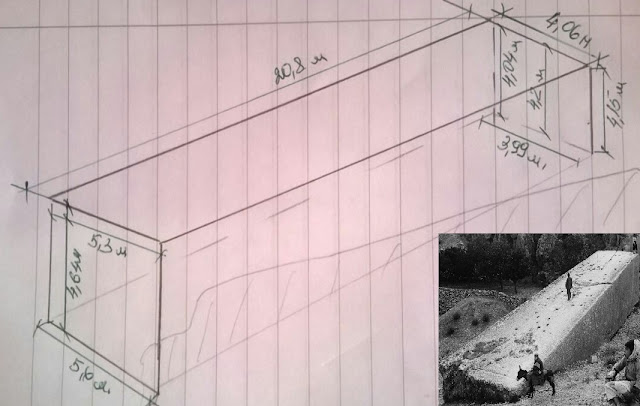 I just added a photo in the corner to make it clear which side shows the stone in the drawing.

Please note that the ends of this megalith differ in size by more than a meter or by 25%!

This fact categorically refused to accept Andrei Sklyarov, accusing Anastasia of negligence and of me in blaring the topic. But, after all, the same measurement result indicated half a year before that and Svetel http://laiforum.ru/viewtopic.php?p=50380#p50380:

For some reason, Sklyarov did not resent Svetel’s carelessness, although she had the same measurement results. And I just began to be rude in public, allegedly I was engaged in flood.

Obviously, Sklyarov is insane. It is not possible to explain a different reaction to the same event.

The famous researcher Nicholas Nepomnyashchy in his book 100 GREAT RIDDLES OF HISTORY writes the same thing:

In two topics of the forum, Sklyarov, instead of thanking him, in every way criticized Anastasia for the incorrect, in his opinion, measurement result and for his inability to draw. But how can you make a mistake on 1 meter out of 4, and, at the same time, its result coincided with the results of Svetel and from the book of Nepomnyastchy?

Sklyarov promised to provide the measurements made by his group, but did not promise to fulfill the promised promise. 4 days we waited for his answer but never waited and the topic was closed.

It seems that they did not measure the lower end of megalith in general, but only assumed that it is the same as the upper one.

I first encountered the fact that Sklyarov was not able to admit even his mathematical errors. Instead, he strongly began to humiliate Anastasia. Then she does not know how to draw, then she is mistaken for a meter out of 4.

Although she draws professionally, but in this case it was only a sketch.

Here is the process of measuring Anastasia: 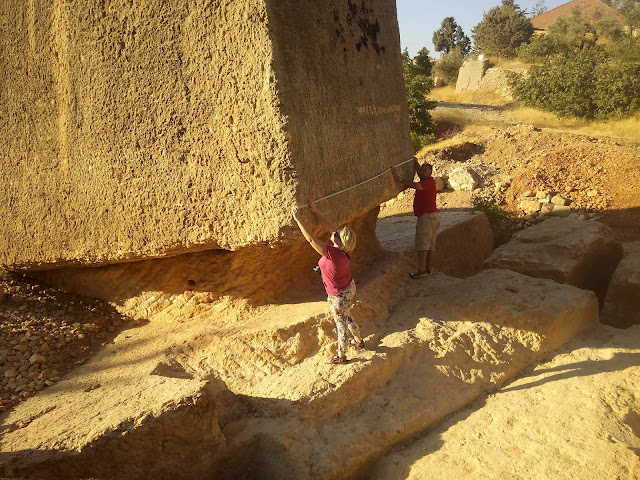 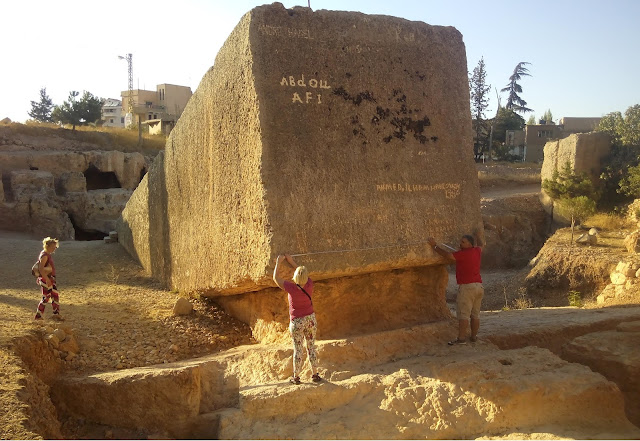 A block that has not been excavated to the end gives the impression of infinite depth: 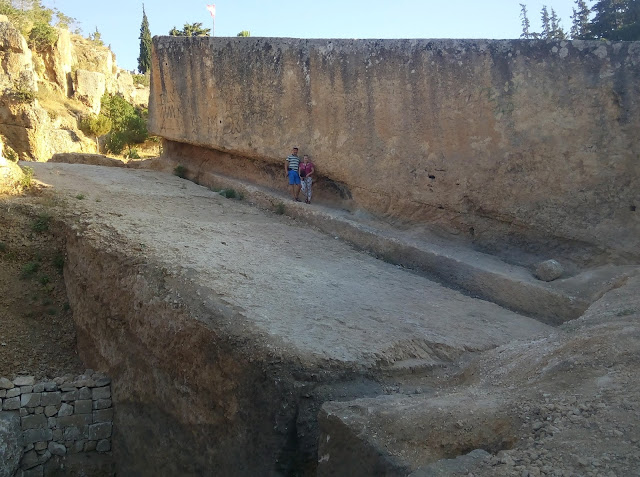 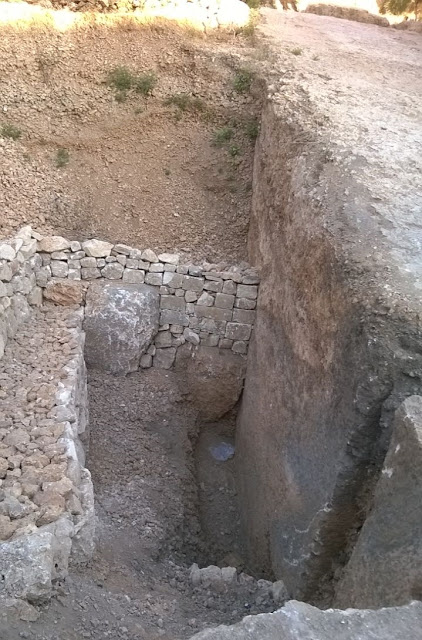 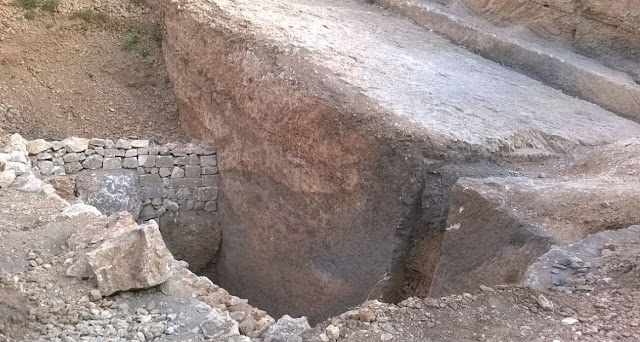 More information about this insanity Sklyarov on nonsense in a separate topic Sklyarov resentment. Laboratory of Alternative History of the width of the back end of the southern stone in Baalbek – whoever does not read this, that fool.

But the traditional for the technology of the gods rectangular hole of unknown purpose: 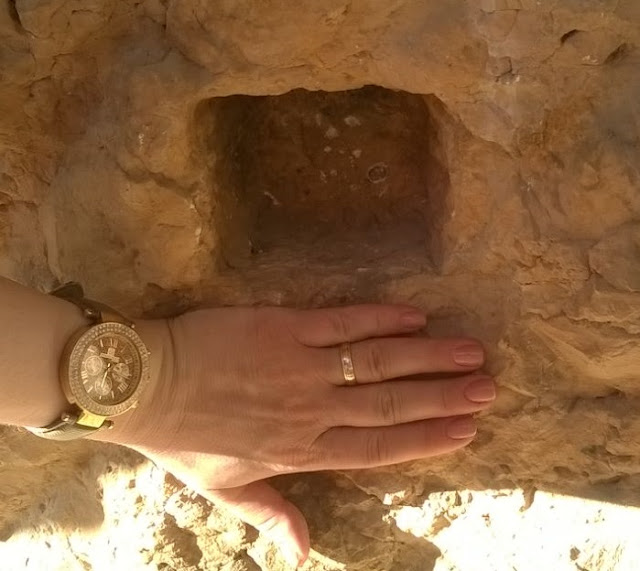 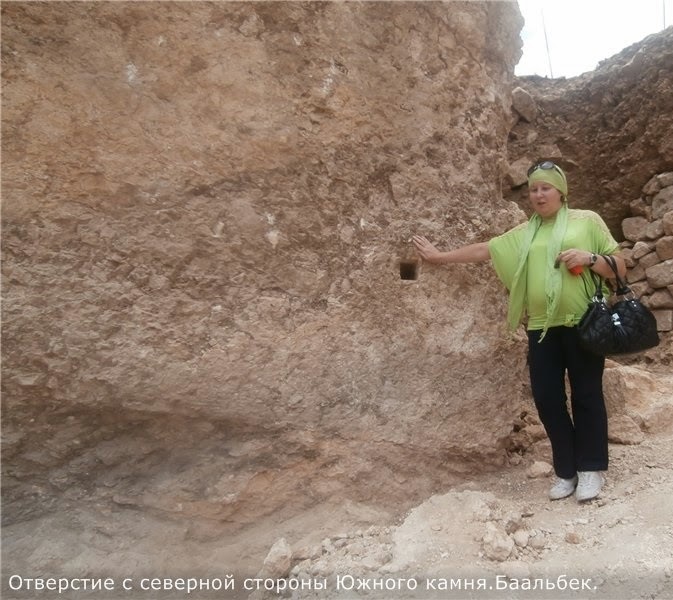 Most often, the holes in the vertical surfaces but come across and in horizontal: 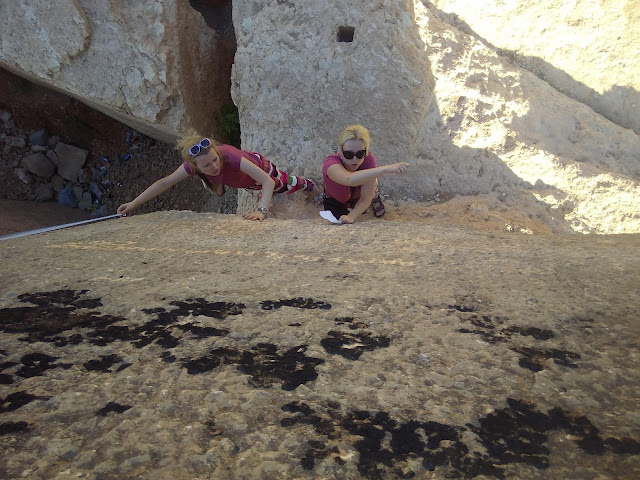 These rectangular holes are present on megaliths around the world. This is a separate interesting topic.

Another aspect carried knitted with new excavations. Here is the surface of a megalith extracted from Baalbek: 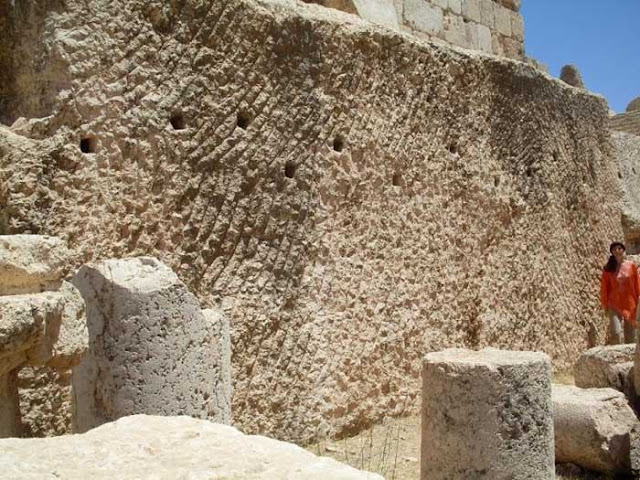 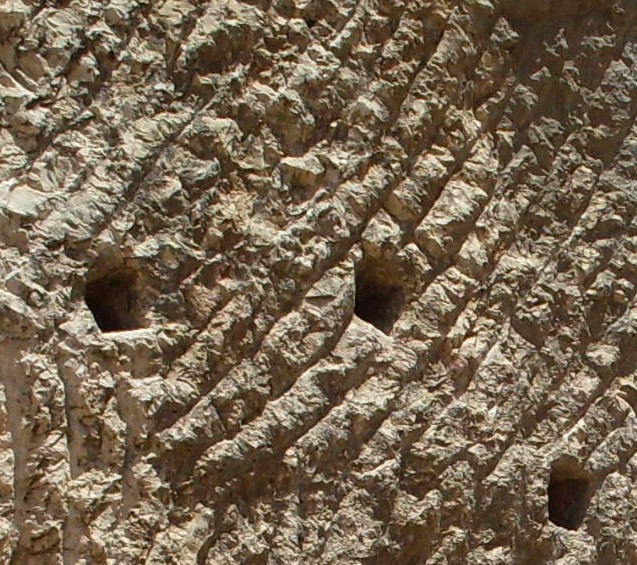 He is cut up by some kind of tool like a rake, leaving deep parallel grooves. The same traces are left by modern drilling machines and the same traces are clearly machine processing of ancient megaliths scattered around the world. Details here: Ancient civilizations cut granite with the help of rotating spikes